SOME PEOPLE JUST FIND THE TIME

I find it interesting that some people, especially our youth, can pack so much into their

lives, while others with seemingly much less on their plate feel overwhelmed.  I’ve had many students over the years decide not to try a sport because they didn’t think they had the time.  While that might be factual some of the time as we all have differing capacities, I think the reality more often is that sports or other school activities teach time management skills, and those who choose not to take advantage of that miss the opportunity for growth.

As we move through graduation season, the stories of amazing accomplishments and success despite adversities abound.  It’s an uplifting time of year when we realize the capacity and strong future some of our best and brightest young people offer our future.

Emma Sutherland is one of those people, with one of those stories.  She possesses an eclectic group of talents and passions along with great drive and work ethic.   Emma is a Valedictorian at C.S. Lewis Academy in Newberg, OR.  In and of itself, not amazing, all schools have a Valedictorian.  She is also a student-athlete, participating in Track & Field.  Again, the double of valedictorian and student-athlete go together in many young people driven to do their best.  Add to that mix, student-body president, as Emma was involved in school leadership all through high school.  Now, you are starting to see a broader package of accomplishments, but again, it’s a package not exactly rare at our nation's top colleges and universities.

Well, we’ll add her passion for photography.  This is not just the student who snaps a few photos for her school yearbook, but one focused on gaining skills and eventually a future utilizing those same photography talents.  We’re now seeing Emma is quite driven and obviously must have great time management skills, but we’re only part way there.  Emma, a strong Christian, also finds time to be very active in her church and has acted as her school’s Chaplain.  Can you say well-rounded and well-grounded?

So far, we have a strong academic student, who is a school leader and athlete, with a passion for photography and is very active in her church.  As noted above, she is obviously accomplished, possesses a strong work ethic, and must have a great calendar to keep things straight.

Now, this is where things get a bit different and makes her a bit special.  For many years, Emma has been a big part of a family that supports her father as a race car driver.  During the various race seasons for Ludicrous Speed Racing, Emma spends many weekends cruising in the family RV, pulling the race trailer to tracks around the Western United States.  Her father Ken is a leading Spec Miata driver and crosses over to some Trans-Am racing, which puts him behind the wheel of a classic 1965 Shelby Cobra or a 1968 Mustang.  Emma supports her father as part of his race team.

For the Miata racing, she holds the title of Crew Chief.  She can be found doing pre-race checklists and trackside, with her headset.  She’s comfortable around pressure gauges and torque wrenches, anything to help her father.  After the race, casual eavesdropping of a conversation between her and her father sounds a bit like two old mechanics talking shop.  According to her father, Ken, “Emma has literally grown up at the racetrack and in the process become an integral part of our race team. She often gives up the best places to watch the race to be available to take tire pressures on the car as it comes off the track. She's also in charge of spotting at critical parts of the track during races where she makes the driver aware of any incidents ahead, or other drivers making unexpected moves. She takes her track duties very seriously.” 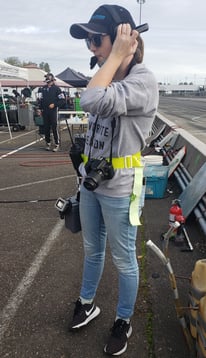 Emma has also taken the opportunity to blend her passions.  When Ken moves out of his Miata, Emma takes the opportunity to switch her crew chief pass to a press pass and hone her skills as a racetrack photographer.  She lights up when she talks about being able to photograph a sport she has grown up with and shared with her family.

One can only imagine how many hours of homework Emma did inside the RV rolling down a highway late on a Sunday evening returning home, or even during the weekend between her father’s races with the roar of engines in the background.  Her mother Carrie, her companion at the track, noted: “Emma has always been very dedicated to her schoolwork.  Since the race season conflicts with school quite a bit, she’s had to learn how to plan ahead, manage her time, and work with her teachers to stay on track.  We feel blessed that she chooses to stay involved with racing as it allows us to spend a lot of time together as a family.  We’re also grateful that the teachers at CS Lewis have seen the benefit of her being involved with racing, even though she misses some school days.  Emma has so many wonderful experiences traveling to different racetracks and working with a lot of great people.”

People with strong time management skills along with determination find the time to do what they need and want to do.  And, many like Emma, are amazingly successful.